Venice serves as a metaphor for my paintings and glass sculptures. Continued interest in the landscape and architectural forms is evidenced in my past work. The paintings, drawings and prints are a response to physical changes wrought upon Venice by time, climate change and modern civilization. It has always been interesting to me to take notice of the status quo and to document change. This interest applies to not only the political climate but the physical world as well.

Twenty-five years-ago I fell in love with the island city of Venice and the promise of making glass sculptures in Murano. This was a direct result of walking into a Contemporary Art Gallery in the center of Venice, next door to The Gritti Palace and across the canal from the Peggy Guggenheim Museum. It was a jewel of a gallery with a stable of eighteen artists from around the globe, but no one person from the United States until I was invited to exhibit my paintings and to work with the glassblowers on Murano. Each artist was represented by a piece of work in her primary media, most were paintings or sculpture. The translation of that work into glass, was installed on a pedestal or in some cases hung from the ceiling.

Encouraged by Ruth Sullivan, founding Curator of Education at the Kimbell Museum and a Pre-Renaissance Italian painting scholar, I returned to Venice to work in the second oldest furnace on the island of Murano. It was the beginning of a twenty-four-year collaboration with the Maestro, Oscar Zanetti and seven other men. I went on to exhibit paintings, monotypes, and glass sculptures in four magnificent galleries in both Venice and Murano.

Ruth's words to me initiated a long career. Returning every June since 1995, I painted and created organic forms in glass, one informed by the other and every one inspired by the light, forms and colors of Venice.

Many of those organic forms were conjured up and drawn while listening to all of the competitor's piano music in Cliburn Competitions since 1997. After each competition, I left in the next few days for Venice to present to the Maestro and then create, the three-dimensional work after these two-dimensional drawings. All together the paintings and glass sculptures form a complex puzzle of sorts that become a never-ending part of what I do as I try to visually represent climatic change and the passage of time on landscape and architectural forms. 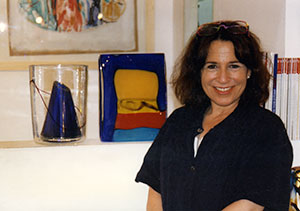 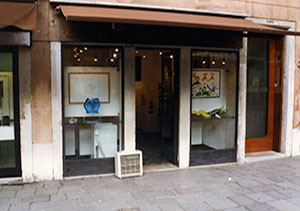 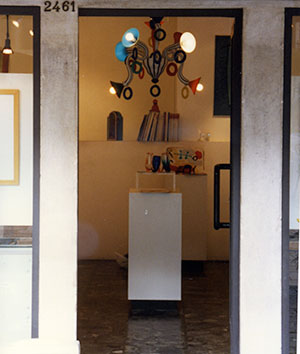